*be cautious if use console* 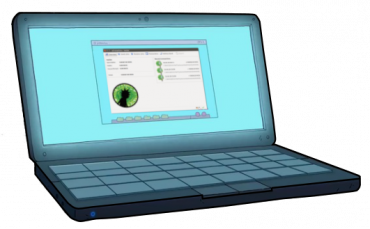 The desktop wallet enables sending, receiving, storing Inifinite Ricks along with minting blocks and securing the Infinite Network.
Download the proper application for your operating system.

Make the Ubuntu application ‘InfiniteRicks-qt’ executable before you run it.
Right-click on the ‘InfiniteRicks-qt’  ->  ‘Properties’  ->  Permissions tab  ->  mark the  ‘Allow executing file as program’ checkbox  ->  Close the dialog.

The wallet window will appear and start to sync with the network, it will take up to a few minutes to fully synchronize your node with the RICK blockchain.

Complete the security settings to protect your RICKs

When your RICK wallet is first generated, it will be unencrypted. In order to encrypt your wallet, go to ‘Settings’  ->  ‘Encrypt Wallet’.
Create a secure passphrase, this passphrase will be used to verify transactions and unlock the wallet for staking. The passphrase can't be recovered, losing the passphrase means losing all coins held in the wallet.

In order to make a backup of your wallet, go to menu ‘File’  ->  ‘Backup wallet’, choose a location and save the file to your computer.
It is strongly recommended to make at least two backup copies on several removable media storage devices and keep them in a secure place.

Note:
If the passphrase has been changed, the backup becomes invalid. You must backup your wallet again after each passphrase change.

In order to restore from the wallet backup, follow these steps:
- Download Infinite Rick wallet, launch the wallet once and close it.
- Go to the wallet folder
on Windows C:\Users\YourUserName \AppData\Roaming\InfiniteRicks

Once the transaction reaches 12 hours of age, coins will become eligible for minting blocks. Go to ‘Settings’, select ‘Unlock wallet for staking only’ and enter your wallet passphrase.

The wallet can be launched by running the ‘InfiniteRicks-qt’ application

In order to deposit RICKs to your wallet, go to ‘Receive coins". You can generate a new address by clicking the ‘New Address’ button at the bottom of the screen. Get RICKs by earning or purchasing them, and transferring them to your newly generated wallet address. Freshly received coins will be shown as ‘unconfirmed’. It will take 6 confirmations for the coins to become ‘spendable’.

Note:
‘Proof of Stake minting’, also known as ‘staking’, is a process where stakeholders mint new blocks for the network. Every minted block rewards you with new RICKs, so that you can steadily grow your RICKs with a solid reward rate of 307% per year until Infinite Ricks takes over the galaxy.

Once new block is minted, coin age of the initial coins will reset to 0. The coins earned from minting along with initial coins will be shown as ‘stake’. It will take these coins 24 confirmations to become ‘spendable’. Once this transaction reaches 12 hours of age, coins will become eligible for minting blocks again.

And so on forever...

Run the wallet application by double-clicking its icon

Download the latest version of INFINITE RICKS wallet for your preferred OS.

Add nodes to your wallet:

2. Create a new text document with NotePad in the wallet  folder and open it.

3. Go to infinitericks.conf file on GitHub, copy the entire contents of the file and paste the copied text in your new document.

4. Save the file as type choose All Files and filename as InfiniteRicks.conf